Amir Khafagy is an award-winning New York City-based journalist. He is currently a Report for America corps member with Documented. Much of Amir's beat explores the intersections of labor, race, class, immigration, and urban policy.

His writing has been featured in The Guardian, Vice, The New Republic, New York Mag, Bloomberg, Prism, Documented, The Appeal, Dame, The American Prospect, Jacobin, and In These Times. Additionally, Amir has worked as a researcher for the critically acclaimed podcast Serial.

Amir holds a BA in Urban Studies and an MA in Urban Affairs from Queens College.

As a performer, Amir has appeared in Ping Chong & Company's Beyond Sacred: Voices of Muslim Identity. He has also appeared in Gun Country, a Houses on the Moon theatre company production.

A lifelong New Yorker, Amir was born and raised in Jackson Heights, Queens into a working-class, Muslim, immigrant family. His mother is Puerto Rican and his father is an immigrant from Egypt. Follow him on Twitter @AmirKhafagy91 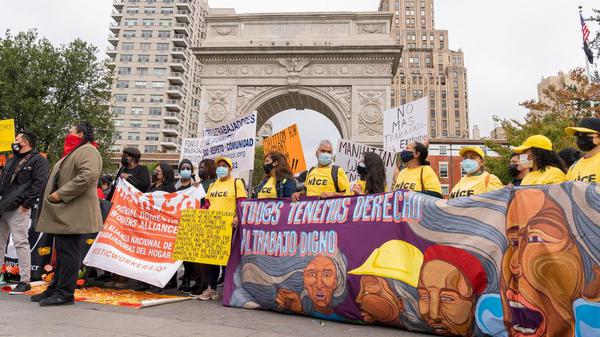 Over the past five years, the mayor-funded Low-Wage Worker Support Initiative has allocated about $2 million annually to nonprofits to provide critical legal help for low-wage, immigrant workers in wage theft cases. Last year alone the initiative recovered more than $3 million in stolen wages for immigrant workers. However, that program will soon be on the chopping block as it was left out of Mayor Eric Adams’ proposed $102.7 billion budget. If cut, immigrant workers victimized by wage theft fe 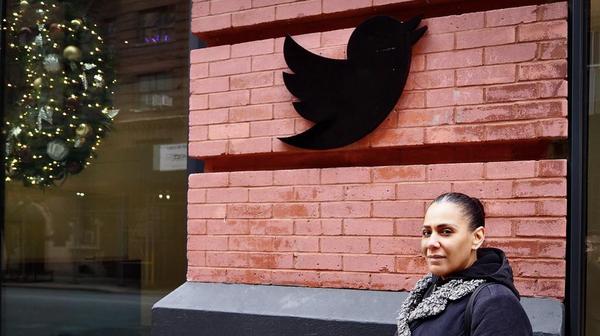 Lucy Calderon, 36, had to cancel Christmas dinner this past year because of sudden layoffs at the Twitter Manhattan office just a week before the holidays. Without her $31-an-hour cleaning job, she couldn’t afford to splurge on her annual family feast. Instead, she spent Christmas sleeping in bed. “It was horrible because my whole family comes to my house,” she said as she struggled to hold back swelling tears. “I’m the one that cooks. I’m my mother’s legacy. I was so depressed and I was going 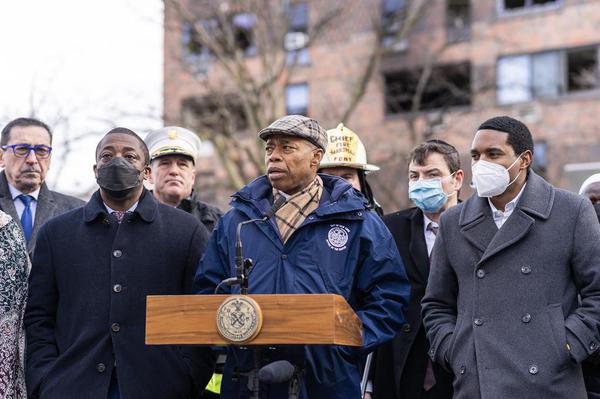 A year has passed since Nikki Campbell, 46, lost her apartment and everything she owned in the 9-alarm Twin Parks fire that left 17 of her neighbors dead. Since that fatal day, the single mother of six teenagers has struggled to put the pieces of her life back together. “We are just trying to rebuild anyway we can,” she said. “We have been suffering for months.” In the weeks immediately after the fire, millions of dollars were raised to help the now-homeless families, many of whom are immigran 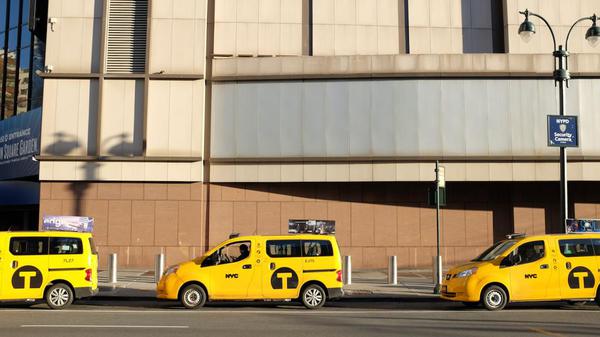 It was an unusually mild August day in 2021, when immigrant Jamaican-American Stanford Miller, 49, who was dropping off relatives at JFK Airport, was approached by an elderly woman looking for a ride. Miller wasn’t a cab driver, but a construction worker on his way to his job. “I felt compassion for her and agreed to drive her since I was heading back there anyway,” he said. The woman was an undercover New York TLC (Taxi & Limousine Commission) officer. Soon after Miller picked up the woman, h 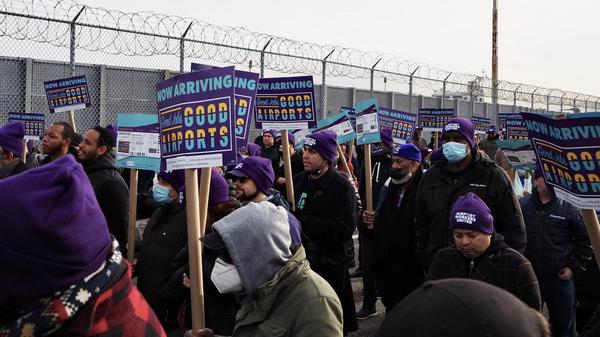 Ahead of the Holiday Travel Season, Immigrant Airport Workers Are in Crisis 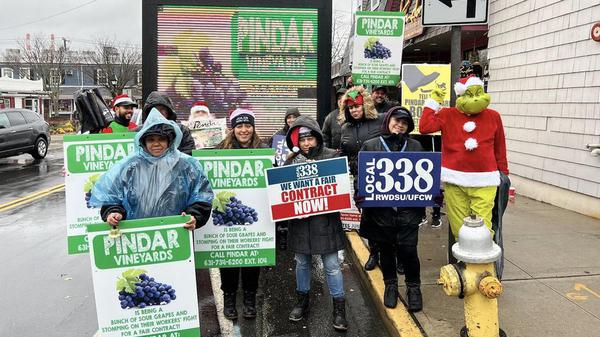 Farm workers on Long Island struggled for three years to form New York’s first farm workers union at Pindar Vineyards. After establishing their union in 2021, to much fanfare, they have embarked on yet another struggle: winning a fair contract. More than a year has gone by and Pindar Vineyard’s owners have refused to negotiate on the first labor contract that would guarantee the farm workers increased wages, paid sick leave, overtime pay, and paid holidays. Since first arriving in the U.S. fro 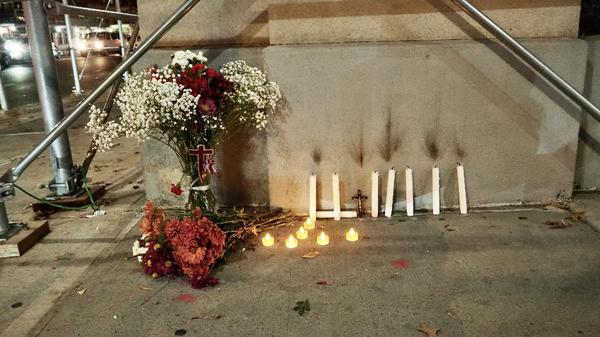 After Construction Worker Falls to His Death, Advocates Pressure Hochul

On Monday, November 28, an unidentified construction worker fell 162 feet to his death while working at a non-union construction site in the Upper West Side. Fellow construction workers huddled below the scaffolding the following night to mourn his death. A makeshift vigil was left at the site consisting of flowers and candles to honor his memory. Across the city, construction worker vigils are common. His death was the third in November. On November 1, 27-year-old immigrant worker Raúl Tenele 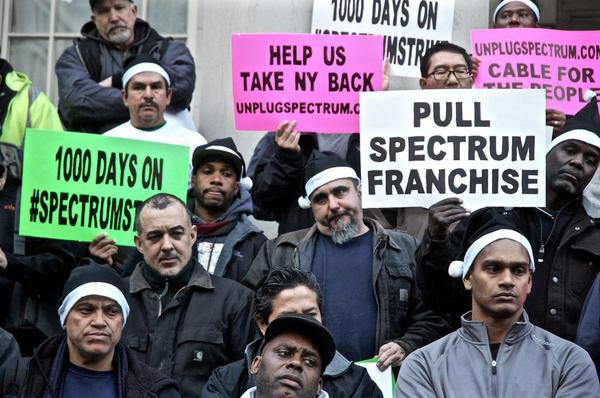 Spectrum Workers are suing their union, The International Brotherhood of Electrical Workers (IBEW) Local 3, for failing to fairly represent them. The lawsuit alleges that Local 3 failed to notify workers that it had reached a settlement with Charter Communications, Spectrum’s parent company, nor did it inform workers of the nature of the settlement with Charter as well as failed to seek consent from the workers. Nearly 1,800 workers, many of whom are Black and Latino immigrants, went on strike, 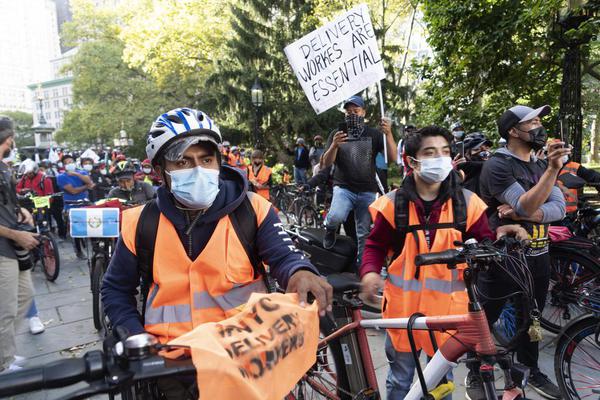 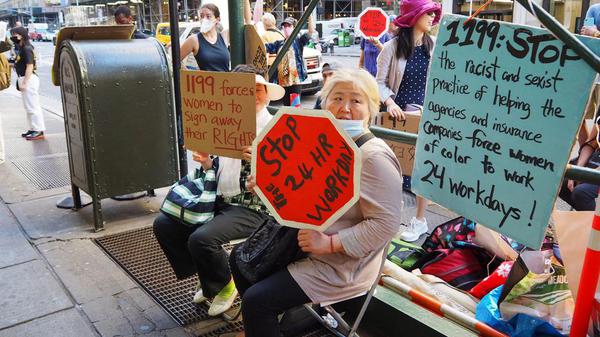 On November 10, the New York State Supreme Court ruled in favor of home healthcare workers who were seeking to recover stolen wages from their employer, Premier Home Health Care Services. The court’s ruling will only apply to workers who retired or left Premier before 2016, when 1199SEIU, the union that represents the workers, entered into an agreement with Premier, forcing them into arbitration. The decision comes several months after 1199SEIU announced an industry-wide $30 million arbitration 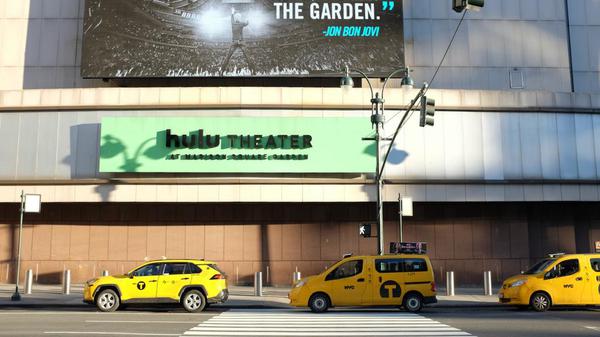 As a ride-share app driver, Basel M. has to navigate traffic jams, angry drivers, and the ever-tightening and hypercompetitive market for rideshare and taxi drivers in New York City. He’s been a cab driver since 2018 and has weathered the pandemic downturn, watched his coworkers fall into financial ruin during the medallion crash, and fought for meager protections from the City government. Despite the daily hardship of being a rideshare driver, there is one little-known agency that causes him th 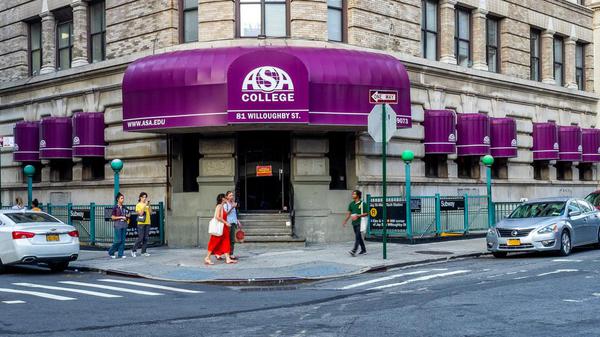 ASA College, a for-profit school based in NYC that targets immigrant students, has lost its accreditation. Plagued by years of legal troubles which include consumer fraud, sexual assault allegations and rogue leadership, the college has reached the end of the line with Middle States Commission on Higher Education, the nation’s leading college accreditation bureau. In its decision released on November 11, Middle States said that ASA College failed to provide quality education, failed to pay empl 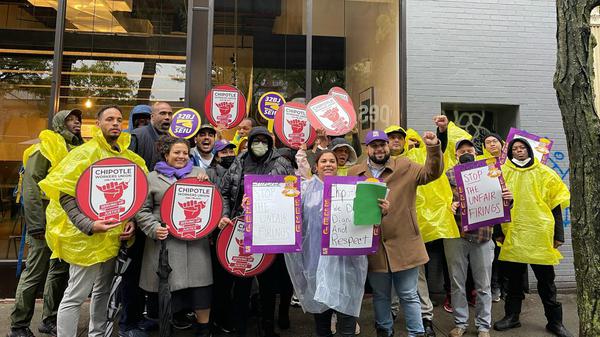 Immigrant Workers Say Chipotle is Firing Them for Organizing

It was December of 2021 and the pandemic still appeared to have no end in sight. Like many other Chipotle immigrant workers, Winifer Pena Ruiz made the decision to quit her past job at McDonald’s to go to her new company’s White Plains Road location in the Bronx. “The pay was better and I thought the hours were going to be better and more flexible,” she said. Since coming to the U.S from the Dominican Republic in 2018, she has been sending almost every penny she earns back home to support her 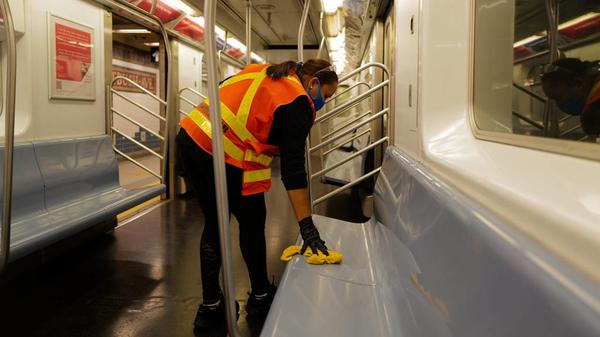 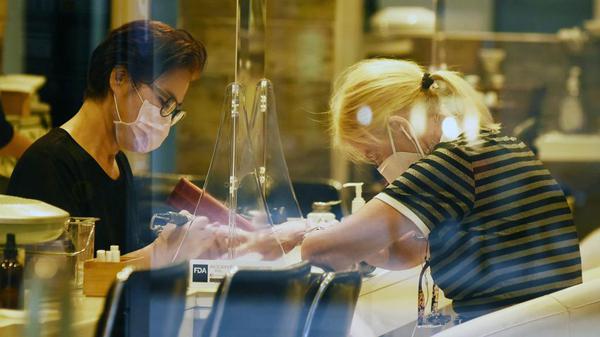 When 38-year-old nail salon worker Pabitra Dash recalls the physical pain she felt the first time she miscarried, she says that the emotional and mental anguish she felt hurt much more. “After the miscarriage, no one comes back to support and give a good aura,” she said. The joy she felt the second time she got pregnant was quickly squashed when she began to feel familiar abdominal pain. “I knew it was going to be a miscarriage again,” Dash said. Throughout her brief third pregnancy, Dash wa

When Farouk Armand first arrived in New York from Burkina Faso in 2016, he was eager to experience the City’s world-renowned education system. Armed with a coveted F-1 Visa, Armand was in search of the best school to study business administration. A friend suggested he apply to the Downtown Brooklyn campus of ASA College because they easily accepted F-1 Visa holders. Not knowing anything about the school, Armand, who was 18-years-old at the time, applied and was accepted. What Armand didn’t kno 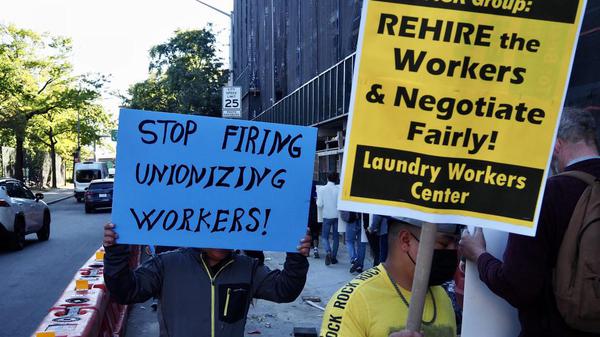 Porfirio Lopez began working at Best Super Cleaning as a demolition and construction cleaning worker in 2018. He had high hopes that the job would provide him with a decent living so he could support his family back home in Mexico. Almost immediately after he began working for the company, Lopez’s hopes began to diminish. Workers were forced to do demolition work with their bare hands because the company refused to provide tools or even gloves, he said. When working sometimes 10 stories high, w 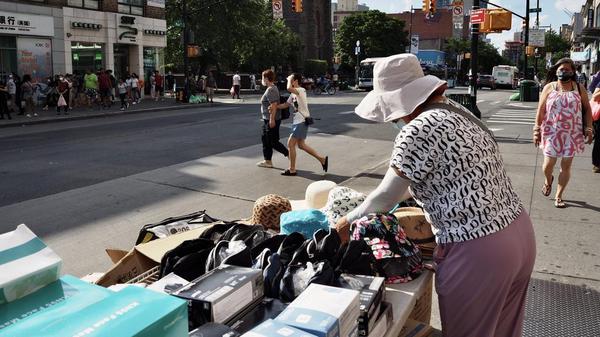 During the peak summer months, business is booming for Mohamed Awad, an Egyptian street vendor who operates a halal food stand at Hudson Yards. With so many tourists flooding the area, there is plenty of business for everyone. Instead of competing with one another, the food vendors cooperate with each other and Awad is their unofficial mayor. Although business is good, the vendors have found that the NYPD has become a major thorn in their side. Awad says he has received 75 tickets in the last si 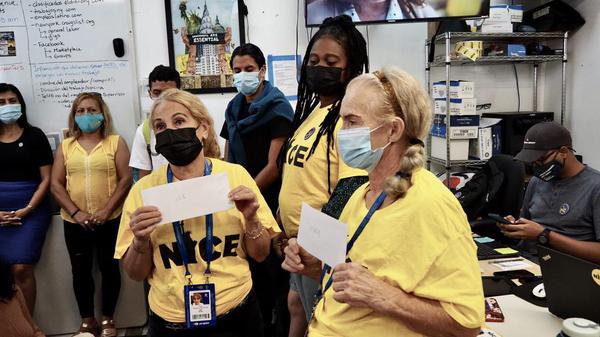 A week after Documented first reported allegations made by three immigrant women who said they were not paid for work they did at the U.S. Open, the workers announced that they were finally being paid back wages, which they were owed for a year. Cecilia Valdés, who worked at the U.S Open in 2021, was in awe of how quickly she was able to be paid with the help of NICE, after a year of trying on her own. It was the first time she has ever engaged in political action in her life. “I feel so good

On a rainy Tuesday morning, nearly a hundred home care workers and their supporters gathered outside the gates of City Hall demanding an end to 24-hour work shifts. The group chanted “no more 24!” in anticipation of the hearing being held that day to discuss freshmen City Councilmember Christopher Marte’s bill to ban 24-hour shifts. Across the street, a smaller but equally as voracious crowd of demonstrators enthusiastically chanted “kill the bill.” The people demonstrating against the bill wer
Load More Articles
Close ✕